Subspecies and range of Delias ingai : 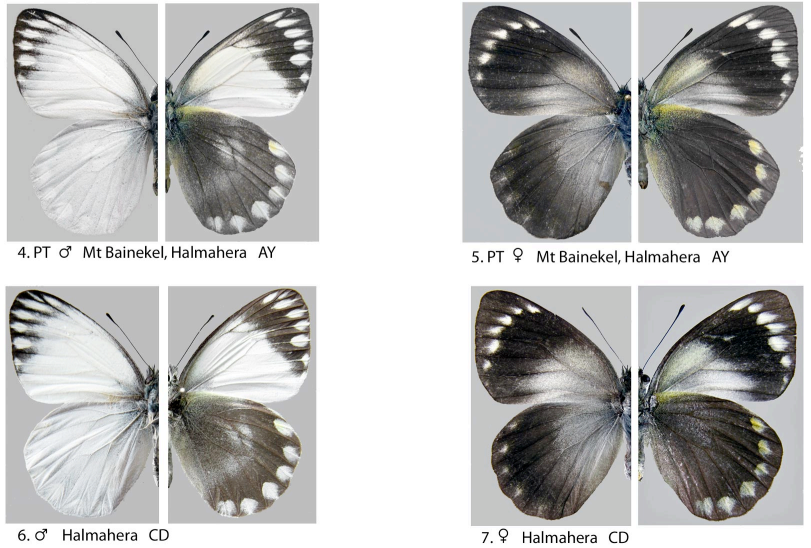 Hindwing upperside: Mostly white. Hindwing underside: Ground colour is black ash-coloured. The lozenge whitish spot at submarginal area in space 6 is partially yellowish. The speckle at the base of space 8 (Commonly called as "Delias spots") is yellowish with the end in whitish along costa. The discal whitish area obscurely about 3mm in width, divided with black veins in space 3 and 4. The white sprinkled scales appear as a belt in the discal area of the wing.

Foerwing upperside. Basal half is greyish. Apical half is blackish. Submarginal area with white spots at space 2 to 5, 7 and 9 each. Forewing underside: The pattern is the same as forewing upperside fundementally. However submarginal spots are rather large. Apical area is rather brownish. Cell end with a whitish line. Costal and basal areas in cell are dusted with yellow scales.

Hindwing upperside: Basal half is greyish. Distal half is blackins. Obscure whitish dots are present at the submarginal area in space 2 to 6. Hindwing underside: Ground colour is dar greyish-brown. Fundementally the same pattern as in the male. The submarginal whitish spots, powdered with yellow scales inwardly are not reach to the outer margin. The degrees of yellow of the submarginal spots are deeper gradually from in space 1b to space 6.'.