Subspecies and range of Delias vidua : 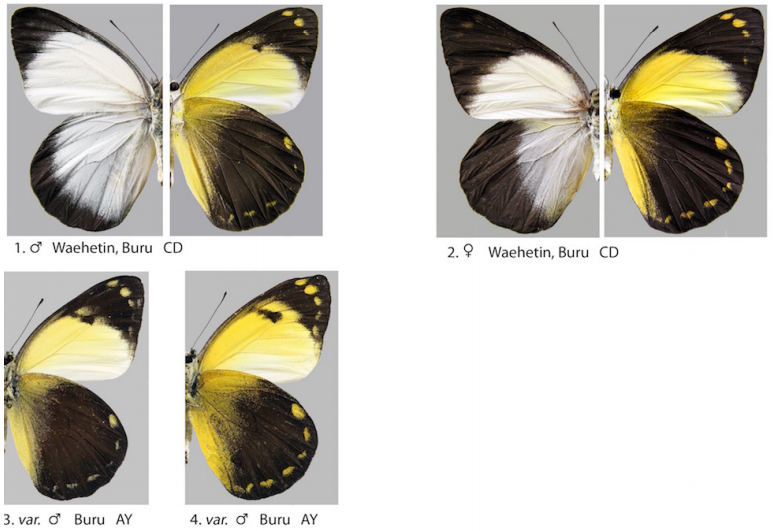 Very similar to Delias eschatia but may be distinguished by the forewing underside being yellow, as opposed to predominantly white, with both species having black apical markings. The subapical spots are also a stronger shade of yellow.

Original Description - Male: Joicey & Talbot - Entomologist lvi -1923 : "Upperside white. Fore wing with broad black apical area and costa narrowly black. Hind wing with broad black distal area, in cellules 2 and 3 with distinct triangular prolongations. The black dusting along the edge of the white area is more uniform but less strongly present than in isse echo. Underside with fuscous-black ground-colour. Fore wing with apical area somewhat as in echo but broader; proximal area pale yellow, paler still posteriorly. Five small submarginal spots in 3, 4, 5, 6 and 8, the two anterior ones the larger. Hind wing with a submarginal series of six yellow spots, the one in 6 the larger, the others uniform and somewhat linear. Base to near middle of cell and cellule 8 dusted with yellow, inner margin yellow."

Female: Joicey & Talbot - Bull. Hill Mus. i, pt 2 - 1922 : "Upperside of fore wing with white area more extended than in echo, reaching the end of the cell, and curving outwards by the origin of vein 4 to the tornus. Hind wing with white basal half reaching beyond the cell. Underside of fore wing with sharply-defined yellowish-white areas as above. Five pale yellow submarginal dots, those in 2 and 4 farther from the margin than in echo. Hind wing with basal yellow area not well defined, but reaching base of vein 6. Submarginal series of yellow spots placed a little farther from the margin than in echo."