Subspecies and range of Delias fruhstorferi : 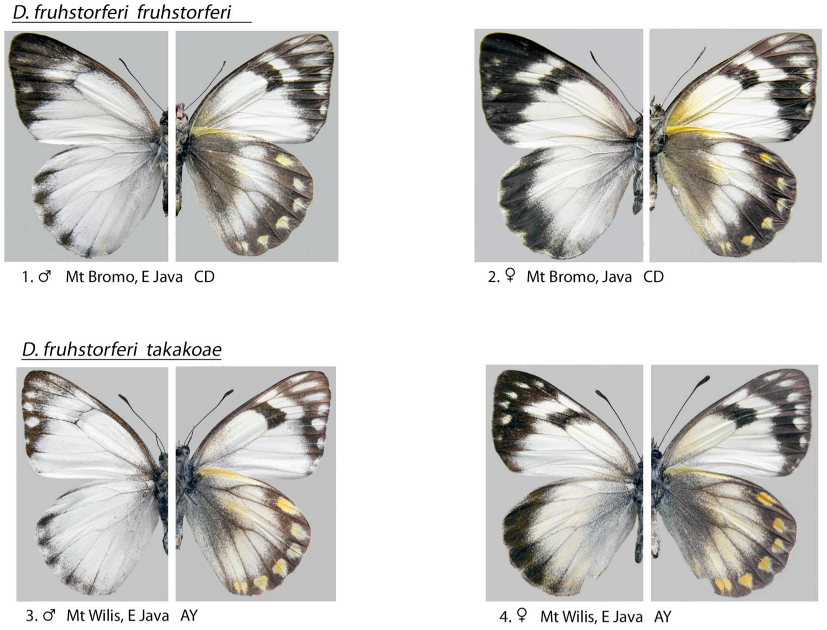 A similar species to Delias momea, and appears to be a progression from D. m. ikuyoae. Genetically it differs in that the valve possesses a large cavity, and also the scent-scale differs from the others in the group.

Male: Upperside of fore-wing as in D. nysa Fabricius, with brownish-black costal border and distal area. The distal area is distant from the end of the cell and is angled in cellule 4 and also in 3; some indistinct submarginal spots. Hind wing with black marginal vein-spots on 2-6, and slight black dusting between them.

Underside different to Delias momea and Delias nysa, with fuscous-brown ground colour. Fore wing with white proximal half except a dark basal area which does not reach vein 2 and is slightly mixed with yellow. Outer edge of white area rounded in the cell, not reaching the cross-veins, and from vein 4 to inner margin ill-defined and outwardly oblique. A postcellular white bar from the subcostal to vein 4. A series of seven submarginal spots of which those in 3-6 are large, the one in 4 square-shaped and near the margin, the one below it larger and projecting beyond it, the two lower spots very small, of which the lowest is represented by a short divided line. Hind wing with a broad white discal band whose edges are not sharply defined; inner edge passing through the cell and the bases of cellules 2 and 6, and slightly incurved at the middle; outer edge produced in cellule 4. Six submarginal spots white tinged with yellow, larger than in nysa and momea, somewhat triangular, their apices directed distad. Cellule 8 yellow to the base.

Female: Upperside of fore wing with white proximal half as in D. momea but outer edge more indented on veins 2 and 3. A white postcellular bar of three spots (absent in  momea and nysa), and five small submarginal spots, the lower one in 3 and the third in 5 more distinct than the others. Hind wing with a broad black marginal border not to sharply defined as in momea, and angled at vein 4. A grey-white marginal line produced in cellules 3-5 to form small triangular spots, and in cellule 6 to a streak. Base of fore wing and basal area of hind wing dusted with black.