Subspecies and range of Delias bakeri : 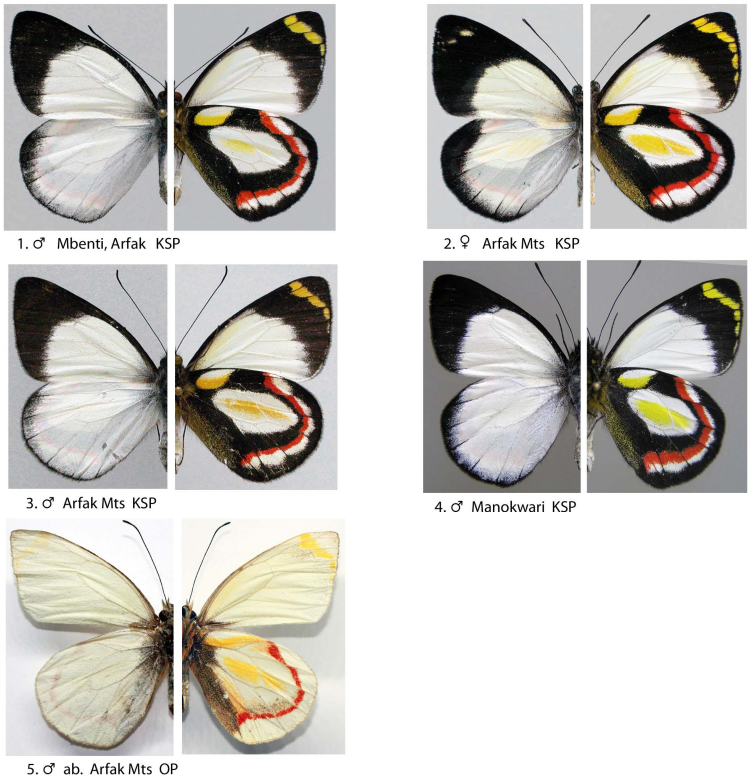 Not a rare species, but it has a very restricted range. Similar to D.mesoblema, D.flavistriga, D.arabuana and D.awongkor, it can be distinguished by the central white patch on the underside hind wing appearing to have a single yellow stripe, whereas the other species have the patch more suffused with yellow.

Male: Upperside of fore wing with white area reaching beyond end of cell to a variable extent, its edge nearly straight from vein 4 to inner margin and farther from the tornus than in D. mesoblema. Hind wing with a narrow black border between veins 4-6.

Underside of fore wing with white area less extended beyond the cell and rarely into cellule 5. three yellow subapical spots placed farther from the apex than in mesoblema. A broken thin antemarginal line which in cellule 3 and 4 forms two spots. Hind wing with the pattern similar to mesoblema. In cellule 7, a subbasal somewhat quadrate patch, its lower half yellow, its upper half white. Costa black to the base. White discal area narrower and more ovate than in mesoblema, being reduced below the cell. The red submarginal line is heavier than in mesoblema; it is bordered by smaller white spots which are only separated by black veins and become larger posteriorly. The black outer border is therefore much wider than in mesoblema. White area traversed by a yellow longitudinal stripe. Inner margin more or less dusted with greenish-yellow.

Female: Black margin of both wings much wider than in the male. Fore wing with two white subapical dots.

As far as we know, this is the only Delias ghost aberration specimen known in Delias collections.