Subspecies and range of Delias heroni : 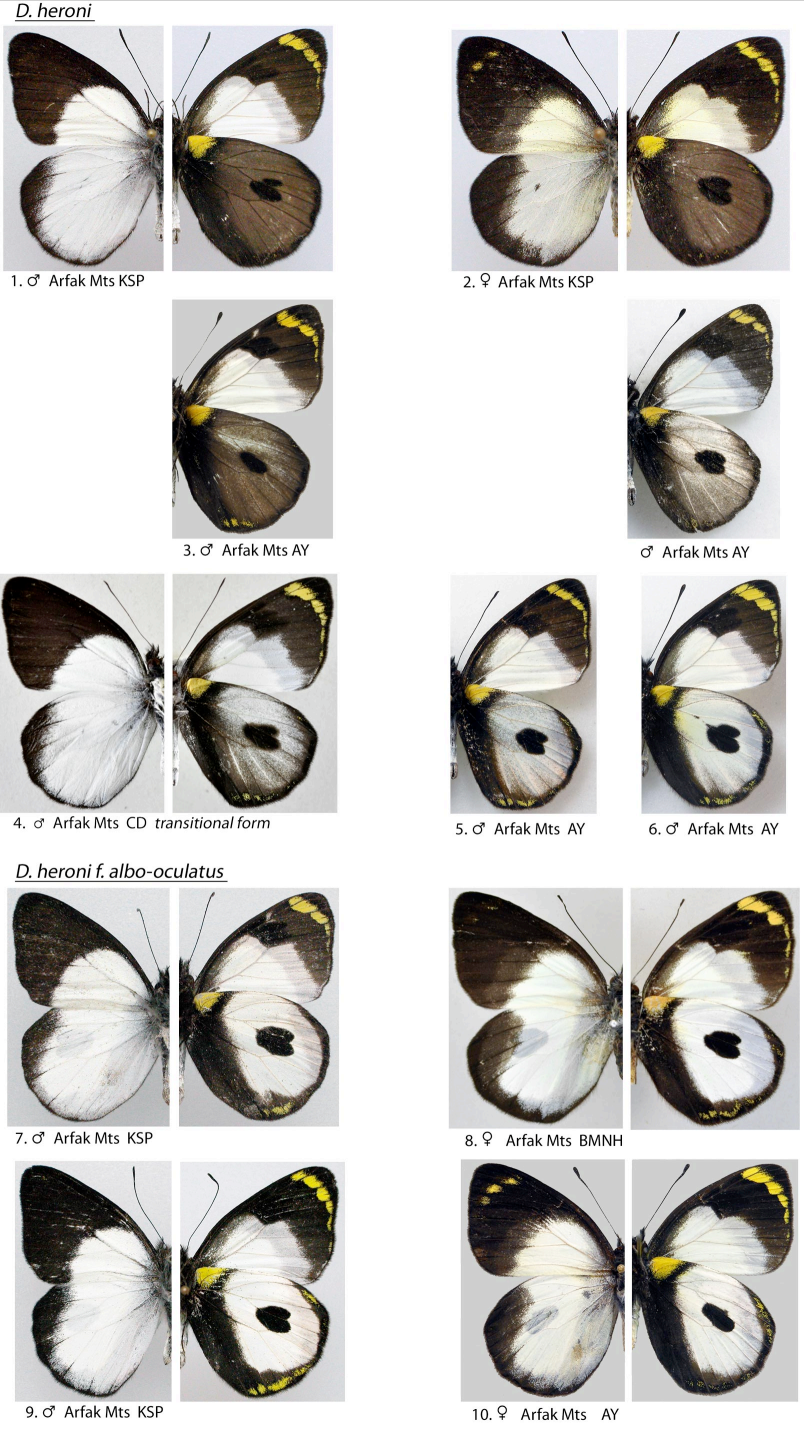 Distinguished by the large yellow subbasal spot on the underside hind wing. Unfortunately, this makes the typical form similar to Delias pratti, and some commercial companies have failed to see the difference, namely the expanse of white on the forewings.
The form albo-oculatus appears to be a dimorphic form, distinguished by the replacement of the dark hindwing, by a gorgeous silvery-white

Both forms may be taken together throughout its limited range.

Male: Upperside white, with black distal half on the fore wing and a black border on the hind wing. The black area of the fore wing extends into the end of the cell, and sometimes fills the base of cellule 3 and the outer two-thirds of 2, and is 3mm. or  ore wide on the inner margin. Hind wing with black border broad between apex and vein 4 (about 6mm. wide on vein 6), and thence becoming a heavy line to the inner angle.  Underside of fore wing with smoky-black distal half and white proximal half. The black area extends into the cell-end and into the upper part of the cell to the base, its proximal edge well defined, sharply angled below the origin of vein 4. A deep black post-cellular patch from the costa to vein 4. three yellow subapical spots in 5, 6 and 8, followed by a small, broken, yellow submarginal line, of which the spot in 4 is more pronounced than the others. Hind wing bronzy-brown, slightly glossy. A yellow basal costal patch reaching the base of cellule 6, and edged with black on the distal side, the inner margin to a third of the cell, but not as far as vein 2, being also black. A narrow distal marginal border of a deeper black extends from vein 7 to the inner angle, and it bears some slight yellow scaling between the inner angle and vein 4. A rounded, sharply defined deep black discal patch between veins 3 and 5, slightly entering the cell.

f. albo-oculatus: Differs only in the replacement of the bronzy-coloured area of the hind wing below by silvery-white