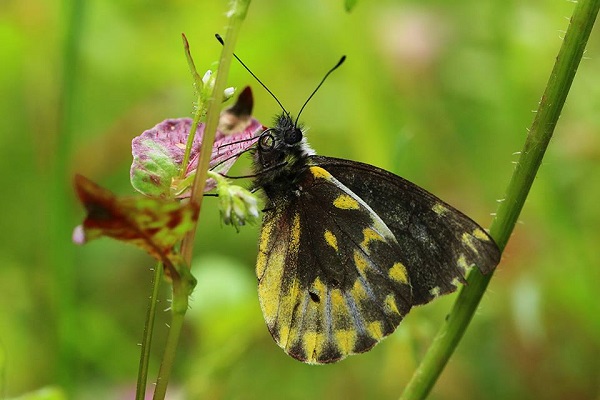 Subspecies and range of Delias kenricki : 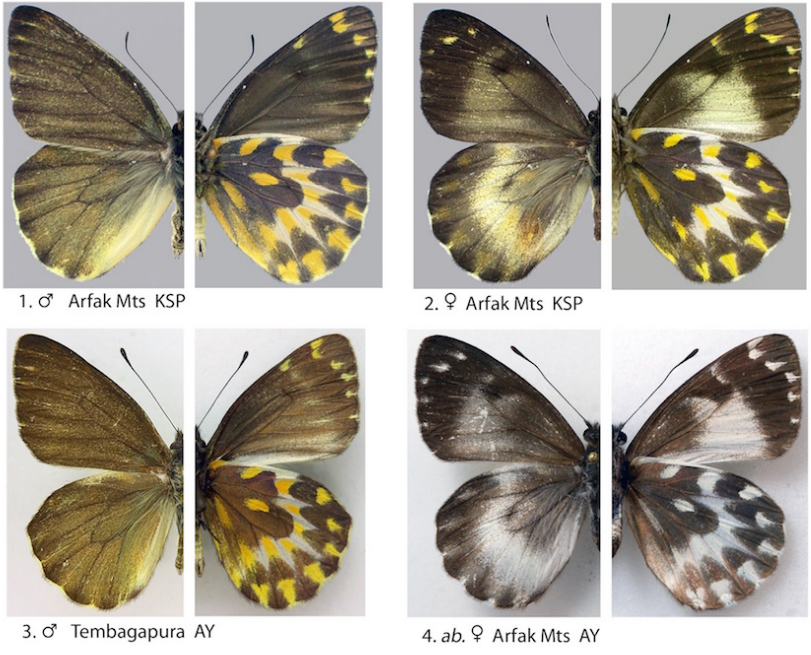 Easily distinguishable by the dark colouring over the entire upperside. There are two forms of the female.

Male: Upperside blackish-brown dusted with yellow, sometimes quite considerably. Fore wing with two subapical yellowish dots, sometimes indistinct; three or four submarginal dots close to the margin, usually forming short marginal streaks. Fringe blackish-brown. Hind wing more strongly dusted with yellow, the inner margin and proximal two-thirds of costa yellowish-white. Short marginal streaks or dots between the veins breaking up a narrow black marginal border defined by the absence of yellow dusting. In one specimen, the yellow dusting is absent and the upperside is grey-black with creamy-white markings. Underside pattern more nearly approaches imitator but the fore wing is without a band, and the band of the hind wing is very narrow. The hind wing pattern is also much like pheres and aroae. Fore wing brownish-black, the inner margin sometimes dusted with white. Three small yellow subapical spots, and three smaller submarginal ones with distal prolongation. Hind wing black with a purplish tinge. A small yellow basal costal spot, between which the ban and the costa is narrowly white. A yellow subcostal spot in 7 and a larger one in the cell. Postdiscal band as in the allied species from costa to vein 2, white with a yellow bar in each cellule, outer edge strongly scalloped with longer prolongations on veins 3 and 4. A short yellow stripe below the cell, and a yellow or orange spot terminating the band on the submedian fold. Some yellow inner marginal dusting. Six pale yellow submarginal spots shaped as in aroae and pheres, the anterior three the smaller, the others prolonged to the margin.

Female f. fuliginosus: Resembles the male, but upperside with only slight yellow dusting. Fore wing dots more distinct. A postdiscal shadowy band which defines a dark patch of ground-colour outside end of cell. Hind wing with a postdiscal shadowy band. Underside of fore wing with postdiscal yellowish-white dusting indicating a broad band from vein 4 to margin, with slight dusting from vein 4 to subcostal spot. This is interesting as showing some affinity with imitator. Hind wing as in the male, the band a little broader and less marked with yellow.

Female f.ochraceus: the shadowy postdiscal band seen in the typical female is here much more distinctly defined by dense ochraceous dusting, especially on the hind wing. The black discoidal spot on the fore wing is rendered more distinct. Underside of fore wing with a distinct yellowish-white postdiscal area from the inner margin to vein 4, reaching the margin of cell except at the base, and extended to beyond half the distance between cell and outer margin. There is also a large spot in the cell, and the subcostal spot reaches vein 5 and is connected to the band by yellowish dusting. The band is usually defined on its outer edge and diffuse on its inner edge. Here we have a pattern closely resembling the imitator fore wing. Hind wing as in the typical female.