Subspecies and range of Delias jordani : 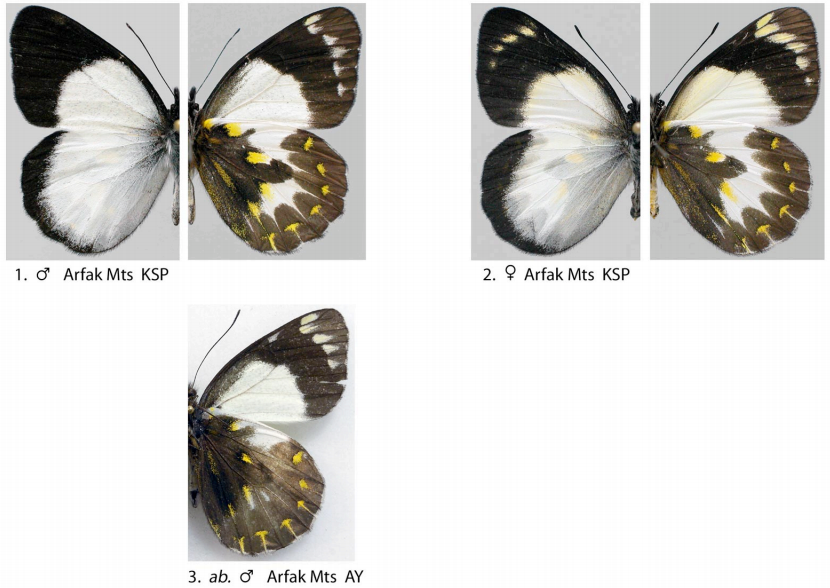 Once considered a subspecies of Delias cuningputi, this species is to be distinguished by the large white proximal area on the underside forewing.

Male: Upperside as in heroni and thompsoni, the fore wing with the white area more extended in cellule 3. Hind wing with the black marginal border more uniformly wider than in thompsoni but narrowing below vein 4, and more sharply defined. Underside of fore wing brownish-black with proximal white area as in heroni but not reaching the tornus and usually excurved at vein 4, though sometimes angled at this vein as in heroni. Five small grey-white subapical spots, the two anterior ones usually tinged with yellow and placed a little more proximal. Sometimes a small white subcostal spot near the base of vein 6. Hind wing with fuscous-brown ground-colour and a white postdiscal band which is constricted and sometimes broken in cellule 4. This band does not enter the cell, its inner edge is sharply defined and strongly incurved at the middle, its outer edge strongly scalloped. Anteriorly the band expands on the costa which is white and bears a small yellow basal spot. There is a small yellow subbasal spot in 7 on the edge of the white area, and beyond it the ground colour forms a short invading bar in the white area. In the cell near the base of cellule 5 is a somewhat oblong yellow spot with a distal white edging; this is sometimes joined to the band. Slight yellow scaling on the inner edge of the band in cellule 2 and in the submedian area, and also between the lower edge of the band below vein 2 and the inner margin. A submarginal row of yellow dots not placed near the margin, the anal one with a thin yellow prolongation to the margin, and those in 2 and 3 with a similar but white prolongation. Fringe of fore wing black, dotted with white at the folds, of the hind wing white mixed with black, nearly black at the veins.

Female: Upperside resembles the male, but is creamy-white with broader black areas. three or four small subapical spots, not very distinct. Underside as in the male. Fore wing with slightly more extended white area especially in the cell. hind wing with yellow markings more orange. Postdiscal band broader in the middle, and marked in cellule 2 by a yellow bar. Submarginal spot in 4 also with a thin white prolongation.