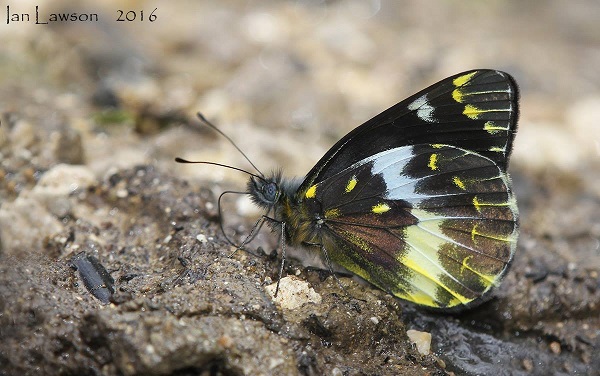 Subspecies and range of Delias fascelis :

Talbot originally placed this species as a subspecies of Delias cuningputi, but is to be distinguished by the white band on the underside of the hindwing being much straighter, and also the yellow dusting on the lower half of the wing.

Subspecies citrona and fascelis have a wonderful yellow upperside and are rare in collection. They were often treated as full species but Henk van Mastrigt proved they were ssp of fascelis in Futao, No 41, ISSN 0916-1112 (22 June 2002).

Male: The basal area of the fore wing, above, has the peculiar greyish tone of D. cuningputi but reaches only to the point of origin of M¹, more than half the wing being black. the black costal border (as in cuningputi) does not invade the cell. There are several exceedingly small white subapical dots, and occasionally also feeble traces of dots at the ends of some veins. The black border of the hind wing is more sharply defined than in cuningputi; measures nearly 10mm. in front and narrows to a point posteriorly. The white marginal spots are smaller than in cuningputi. The underside resembles that of cuningputi, but the spots are deeper yellow; the one or two small spots placed distally from the cell of the fore wing are yellow. The median band of the hind wing is anteriorly narrower than in cuningputi and posteriorly broader, and is so suffused with black in front of the apex of the cell as to be nearly interrupted; the yellow spots are smaller, the submarginal ones being very thin transverse bars; and the ground-colour has a distinct purple tone.

Female: The upperside of the fore wing is black for the greater part. The white area, which has a yellowish tone, is so much suffused with black proximally that it is reduced to a triangular patch extending from the hind margin to the cell and hardly reaching vein M¹; the black outer border measures 4-5 mm. at SM²; in some specimens the white patch is shaded all over with black and is more distinctly yellow. there is a subapical curved row of four pale yellow dots. The hind wing has also a slight yellow tone. the black border gradually narrows to a point as in the male; it is, however, as a rule narrower anteriorly than in that sex. the white area of the fore wing beneath is less suffused with black than above and is a little larger, there being also a spot in the cell; there is a small yellowish subcostal dot beyond the cell and a subapical row of five yellow spots, the margin moreover bearing some minute white dots. The hind wing resembles that of the male in the yellow spots being smaller than in cuningputi and the median band reaching to the anal margin. The hind portion of this band is male and female more distal than in cuningputi. However, the band differs in some females from that of the male in being essentially broader, posteriorly much shaded with yellow, and not interrupted in front of the apex of the cell."