Subspecies and range of Delias cuningputi : 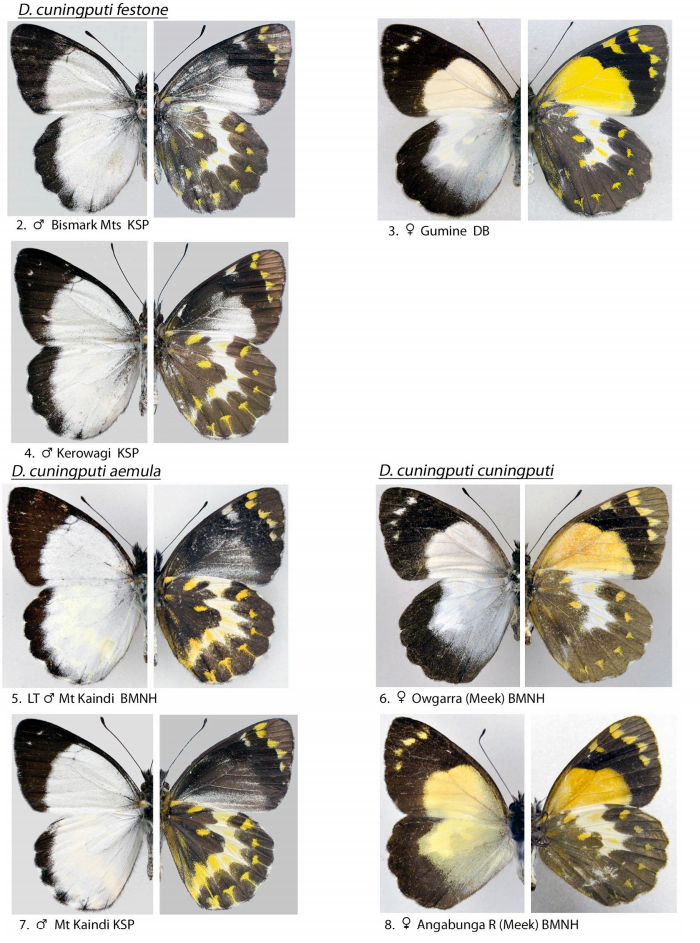 This species was originally divided into three subspecies, D.c.cuningputi, D.c.jordani & D.c.fascelis,. However, they are all now considered to be separate species.

This species is to be distinguished from D. jordani in the male by the uniformly narrower white band on the hind wing and by the subcostal yellow spot being free. D. fascelis differs by having the band of the hind wing being nearly straight and more heavily marked in yellow.

D.konokono is also incorrectly listed by some dealers as this species, and vice versa. They a separated by the lack of the white basal markings on the forewing verso on D.konokono.

Female cuningputi are rare in collection.

Male: Upperside as in jordani but with broader black border on the hind wing. Underside of fore wing black; below vein 2 the inner marginal area is grey-white for the proximal three-fourths, above which a proximal shade represents the white area of the upperside. Five small subapical spots, placed nearer the margin than in jordani, and yellowish-white. The two anterior ones being more distinctly yellow; the area beyond them is earth-brown. Hind wing similar to jordani. The white band is similarly curved, not constricted but narrower, and with less strongly scalloped edge. Costa not white except at the band; subcostal spot free; submarginal spots larger than in jordani with yellow and white dusted prolongations to the margin.

Female: Upperside as in jordani. fore wing with edge of white area more rounded; hind wing with broader marginal black which is sharply angled at vein 5. Underside of fore wing with orange proximal area and subapical spots, the inner margin white. An orange subcostal spot near the base of vein 6, and sometimes one or two beneath it. Hind wing similar to the male but white band abbreviated, broader, only reaching vein 3 where there is a yellow spot near the cell; the band is marked by a yellow bar in each cellule. Submarginal spots as in jordani, therefore smaller than in the male.