Subspecies and range of Delias pratti : 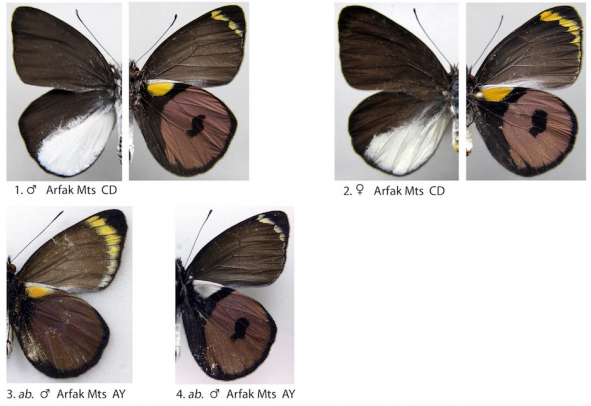 Easily recognised by having the forewing black on both sides, with only a very small amount of white on the inner area of the underside.
The hindwing underside is very similar to that of Delias heroni, and mistakes have been made by dealers in the past. However, a quick look at the forewing will quickly show the difference.
A common species, found in most collections.
Male: Upperside black. Fore wing without markings. Hind wing with an inner white area between cell and inner margin and base and outer margin to vein 4.

Underside of fore wing black, inner margin white except usually near the tornus, and a subapical band of four or five yellow spots as in D. castaneus; from the lower spot a thin antemarginal line runs to the tornus. Hind wing with black ground-colour and the pattern arranged as in castaneus. Distal two-thirds vandyke-brown with a rich purple tinge, leaving a narrow marginal border from the costa to inner margin. Proximal half of costa white to vein 8, between which and the cell is a large chrome-yellow basal patch shaped as in castaneus. A black discal patch, somewhat oblong, close to the cell in cellules 3 and 4 and extending midway into cellule 5, sometimes almost reaching vein 6.

Female: As in the male.