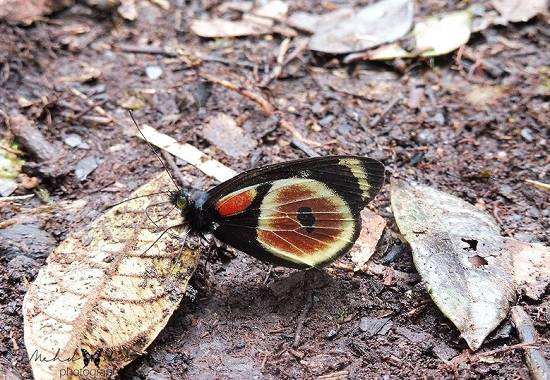 Subspecies and range of Delias castaneus : 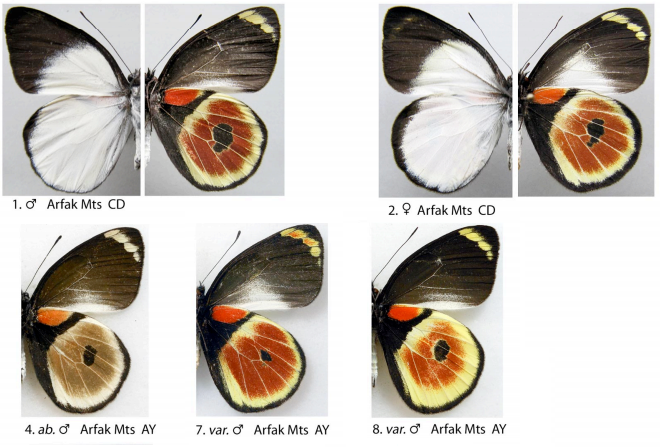 An easily identifiable species, with a large chocolate-brown area surrounded by light yellow and a well marked black distal patch.A common species in collections, despite its limited range.

Male: Upperside white. Fore wing with distal half black to the end of the cell, its edge not sharply defined, and costa black the base. Hind wing with narrow black margin becoming merely a line below vein 4.

Underside of fore wing black with white inner margin, white scaling often extended in the median area to the cell. A subapical band of three sulphur-yellow spots, with sometimes a fourth spot in cellule 4. Usually a white dot or spot on the discocellulars. Hind wing with black ground-colour, but the greater part, to near the distal margin and including distal half of costa, chocolate-brown bordered with sulphur-yellow. The edge of this area is sharply-defined and is straight across the middle of the cell to the submedian. A black discal patch of variable size is placed close to the cell in cellule 4, extending into cellule 5 and usually to a less extent into cellule 3. The veins in the chocolate area are grey-white. There is a large red basal costal patch, somewhat rectangular in shape and separated from the distal area by a narrow stripe of the black ground-colour. This patch extends from the margin of the cell to the yellowish-white costal edging, becoming broader on the costa but not reaching the precostal spur.

Female: Upperside with usually a slight yellow tinge. Fore wing with the black area broader on the inner margin and usually extended into the end of the cell, leaving a white discocellular dot. Two or three yellowish subapical dots or streaks which may sometimes be obsolete. Hind wing with broader black margins than in the male.