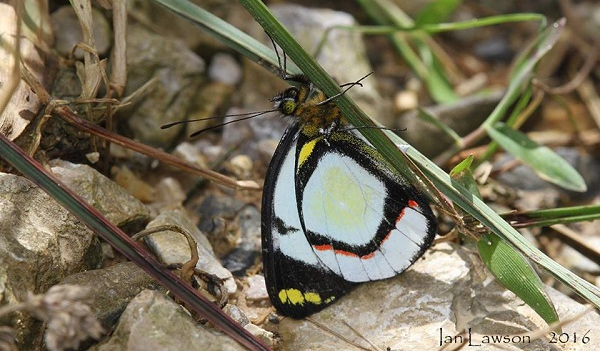 Subspecies and range of Delias hapalina :

This species has been very closely linked with Delias tessei. There is still much discussion on the correct placings of various subspecies. Some experts consider D.tessei conspectirubra to be a subspecies of D.hapalina. Until further research is done on the group, I will retain current thinking in this respect.

Male: Upperside white. The black costal border of the fore wing does not enter the cell. There is no discocellular bar; the black marginal band anteriorly extends to the subcostal fork and gradually narrows to a point posteriorly. There is a faint trace of a white subapical dot. The fringe and extreme edge of the hind wing are black.

On the underside the fore wing bears a narrow discocellular bar and three or four yellow subapical spots, the marginal band being centrally narrower than on the upperside. The central area of the hind wing is more rounded than in D. iltis and the preceding  species, the part situated in front of the cell being essentially larger; the area is white with a distinct buffish yellow tint in the centre. The black postmedian band is narrower than the black streak situated before the abdominal area, and is not lunate as in the previous species. The red line bordering the black band is thin, being usually interrupted below the bend. It forms the inner border of a pure white submarginal band, which is, below the middle, half as wide as the central area. This band is not at all broken up into spots, the black marginal border being thin and only slightly widened at the veins, and this chiefly owing to the margin itself being a little scalloped.

Female: The ground colour has a faintly yellowish tint. The fore wing above bears two white subapical dots and the black marginal band is a little wider from the centre backward in the male, measuring nearly 2 mm. at the hind angle. The black border of the hind wing is as thin as in the male.

The underside is as in the male, except for the fore wing having a yellowish tone proximally and distally, the yellow subapical spots being larger, the centre of the hind wing rather more extended yellowish, and the black bands and the red line visibly broader."