Subspecies and range of Delias mesoblema : 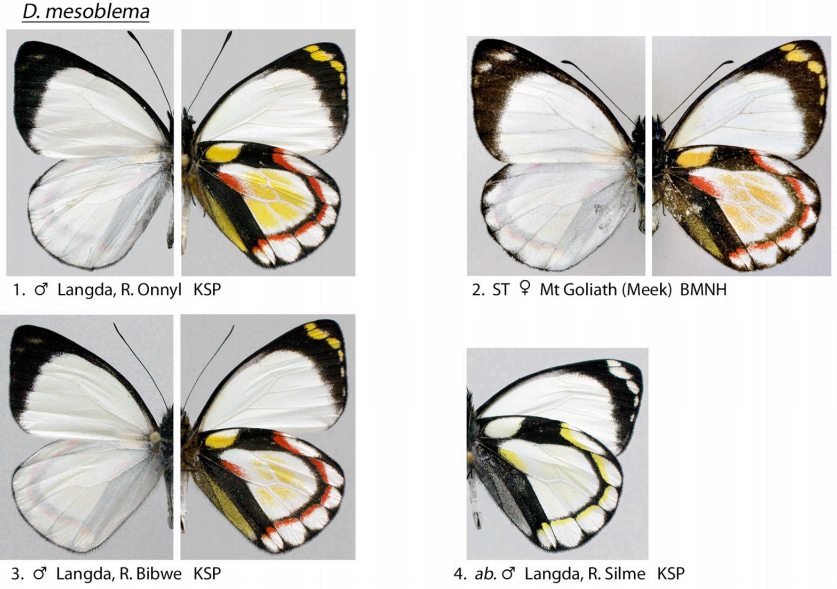 A very rare species in collection. In the past, it was known for a few dealers to advertise Delias luctuosa specimens as this, but this now appears to be in the past. This is due to an identification error in one of d'Abrera's book. The species is closer to D. arabuana, D. awongkor and D. flavistriga.
A very limited range : all specimens I know come from rivers around Langda, and were caught in the early 1990ies.

Male: Upperside of fore wing with the white area usually extended well beyond end of cell; its outer edge is well defined and formed as in D. iltis but without any angle. Costa black to the base. One or two subapical dots. Hind wing white with black fringe.

Underside of fore wing as above, but with two yellow subapical spots, the lower the larger, and three small antemarginal spots in 3-4, also a dot in 2.

Hind wing patter somewhat as in D. bakeri, but differs by the presence of a red cell stripe placed close to the median. (Talbot mentions a red stripe in the base of cellule 6 extending into 7 and states that this was somehow missed in the original description. Talbot was however appears to have been describing a specimen of D. awongkor). A large white discal area bears indistinct yellow patches, one in the cell-end and others in cellules 2-5. This distal area is limited anteriorly by vein 6 and the cell-margin, posteriorly by vein 2, extends in the cell to the base of the red stripe, and distally extends to more than midway between the cell and margin, its distal edge more rounded. The submarginal red line is narrowly separated from the edge of the white area by the black ground-colour, and is bordered by large white patches only separated by black vein-streaks. The narrow black margin forms short triangular spots between the white patches on veins 2-5. In cellule 1b from near the base to the anal angle is a narrow and sharply defined sulphur-yellow stripe.

Female: White area reduced and sometimes tinged with yellow. Hind wing with black marginal border of nearly even width, 4-4.5mm. on vein 4. This border may sometimes bear a row of five white spots, the two anterior ones more distinct than the others.

Underside of the hind wing as in the male, except that the red line is nearer the margin and the white spots smaller.