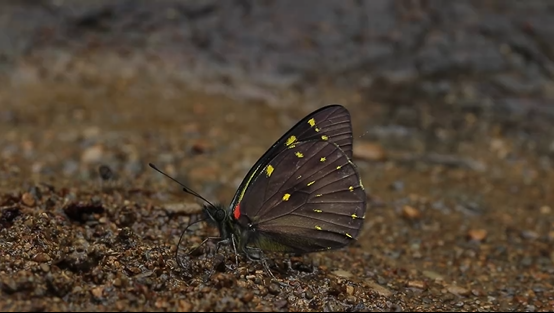 Subspecies and range of Delias microsticha :

The subspecies, Delias microsticha flavopicta was treated by Talbot in his monograph as a separate species, owing to the spot at the base of the costa being yellow instead of red.

Underside purplish olive-black, glossy on the hind wing and at apex of fore wing. Fore wing: a broad streak in cell, gradually arrowed to base, two spots beyond apex of cell, and a series of subapical respectively submarginal dots. Hind wing: a basal costal spot crimson; a spot in middle of costal margin, a row of submarginal dots, a spot in cell beyond middle, and a row of thin short streaks on disc yellow.

Female: The black borders to the upperside of the wings are broader in the female than in the male, the fore wing bearing a row of white, or yellowish-white, submarginal dots and the white area being slightly washed with yellow.

The underside is variable. Some females resemble the male, but there is always a yellowish patch at hinder margin of fore wing beyond middle and a vestige of a band across the disc of hind wing. In a second form of the female the cell of the fore wing and the whole area behind it are yellow, usually washed with orange; in a third form there is, besides, a sharply-defined yellowish-white discal band on hind wing, the inner edge of the band being straight and the outer edge curved."