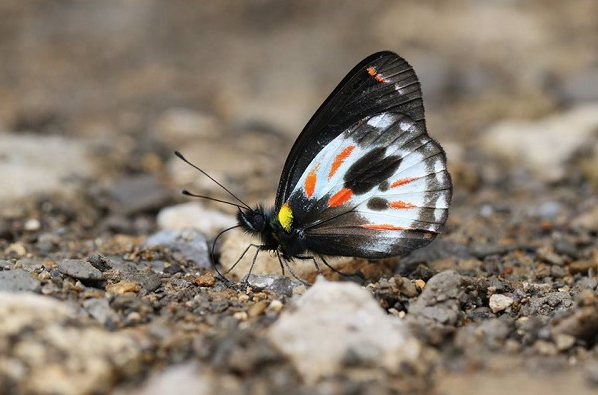 Subspecies and range of Delias hypomelas :

A very variable species. Most of the time black, but with some splendid white forms (form argentata and form clutus).

Classic Delias hypomelas are characterised by the smoky-black underside. The underside has a small yellow costal spot, a black distal patch and a broken white submarginal line.
As its name would suggest, the subspecies D. h. rubrostriata has the hind wing marked with red stripes.
The species is closely related to both D. heroni and D itamputi. A not uncommon species in collections.

Male: Upperside creamy-white with broad black distal area on the fore wing and narrow black margin on the hind wing. The black area on the fore wing reaches the discocellulars. Underside smoky-black. Fore wing with the inner margin white, sometimes some white scaling extending to vein 2. Two yellow subapical spots in 6 and 8, the upper one much the larger, sometimes a yellow dash in 5.

Hind wing with costa yellow at the base, forming a well-defined rounded spot. A white submarginal line, broken at the veins, from vein 7 to 2 or just below it. A black discal patch, just entering the end of the cell, usually lying between veins 3 and 5 or 6.

Female: (Original description vide Jordan, 1911, Novitates Zoologicae xviii) -"This sex is represented in the Tring Museum by two specimens, the only ones known. Both have orange subapical dots on the upper surface of the fore wing and traces of two more, and the proximal area on both wings is white, not yellow as in the female of itamputi. In one specimen the white area reaches, on the fore wing, from the hind margin to near the apex of the cell, occupying the greater part of the cell, the black outer border measuring 4.5mm. at SM²;the black marginal band of the hind wing is 5.5 mm. broad in front and reduced to a line at the anal margin. The second specimen is black for the greater part, the white area of the fore wing being restricted to the base and hindmargin and that of the hind wing extending only to the apex of the cell, both areas being very diffuse at the edges and much powdered with black scales."

Longly thought to be a true species, argentata is in fact a white form of Delias hypomelas that is often found in higher altitude.

The yellow form is far rarer than the red form (f. sanguinea).

In 1995, a new species, Delias destrigata was described by Henk van Mastrigt. This is now considered by many to be simply a form of D. argentata. As far as I am aware, only two specimens have yet been found, and as such, I have decided to show the paratype photos on the subspecies page attached to this species, until further specimens are found and it's true status confirmed.

A very rare full yellow form also exists. Only 2 specimens of this form are known, one in Coll. Pequin from km 45, Pass Valley  and one in KSP Collection from Daela, Baliem Valley (pictured above)